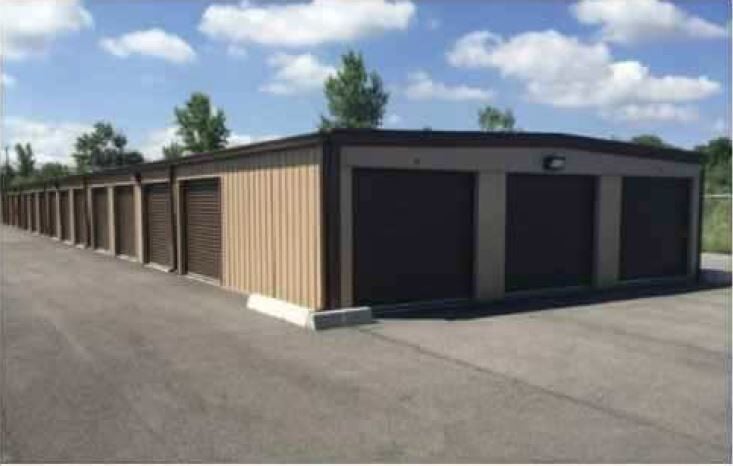 Bogart and Sinatra are planning to construct a set of four single-story buildings with 164 storage rental units at 321 Commerce Drive, in the office and industrial park off Sweet Home Road.

The facility will feature two 4,500-square-foot buildings and two 5,200-square-foot slab-on-grade buildings located on a narrow 1.78-acre parcel on the south side of Commerce, between John Glenn and Woodridge drives, adjacent to Ellicott Creek. Four parking spaces and drive lanes are included in the plan, as well as lighting, landscaping and stormwater management, but no office.

In all, the 19,400 square feet of storage space will include a mix of 10X10 and 10X15 rental units, according to the design and plans by Advanced Design Group of Lewiston.

The duo, who jointly own Bogart-Sinatra Development, acquired the property in November for $180,000 through 321 Commerce LLC from a New Jersey family trust, which in turn had acquired it as part of a larger 3.9-acre property in 2019 for $775,000.

The property is zoned as research and development, and the project was approved Thursday evening by the Amherst Planning Board. If it receives final clearance from the Town Board, construction would take about 12 months, including clearing of the vacant land, which is currently grassy with some small trees.

This is the second self-storage project for the longtime friends, who previously bought the Colvin Storage facility in Buffalo for $1.1 million. They are also building a multitenant facility on 428 Zimmerman St. in North Tonawanda, with 22,000 square feet of contractor and small business storage bays, and previously converted a multitenant warehouse facility at 1212 Erie Ave. in North Tonawanda, where they are also planning to add 150 to 200 self-storage units.

That’s where they got their start, after Sinatra needed some space for his business. He occupies part of the Erie building, while they lease out the rest.

“That got the ball rolling,” Bogart said. “We always wanted to get into real estate, to have passive income. We just started looking at different routes.”

They considered residential or even office development, but quickly settled on storage, although Bogart said he has 9 acres in Pendleton that he will probably develop into apartments. “Self-storage is lower maintenance than apartments,” Bogart said. “This was before a lot of people were rolling into self-storage. Now it’s huge.”

And they’re planning more. “It’s definitely a thriving business. It’s just gotten crazy. They’re popping up all over the place,” Sinatra said. “Everybody’s got a bunch of stuff they need to store.”