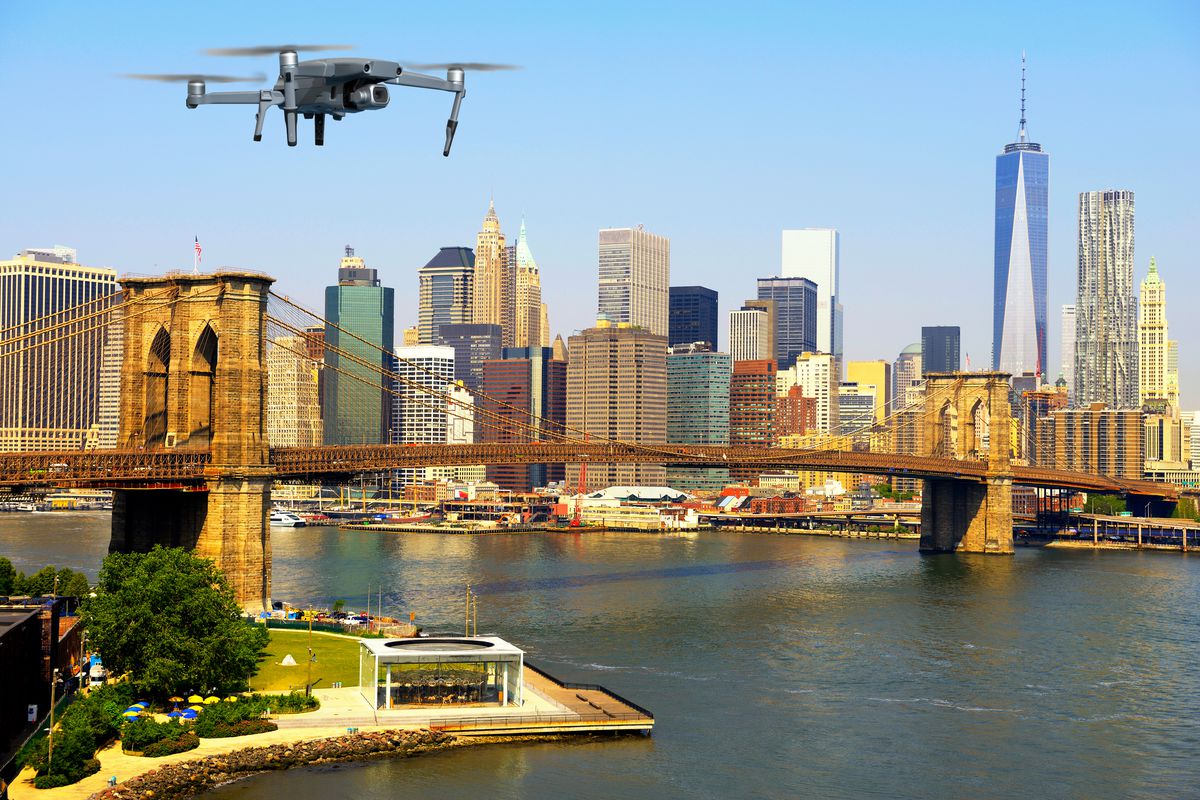 City tax collectors are looking to the sky for more revenue — proposing the use of flying drones to do property assessments with an eye on setting up their own pilot certification program.

But experts say New York City needs to modernize its drone laws before the plan can take off.

Municipalities around the country have used drones for inspections and public safety for years. But New York City is notoriously restrictive in allowing drone flights, thanks to a seven-decade-plus law limiting takeoffs and landings of aircraft to approved airports.

A bill to study drone usage for facade inspections passed this fall. And now the City Council looks to expand its overview of drone regulations with a full task force.

The Department of Finance’s property division released a request for information last week to look into the use of “Unmanned Aircraft Systems” — otherwise known as drones — for tasks such as surveying tax lots, geographic information system (GIS) mapping and aerial photography.

Jaqueline Gold, assistant commissioner of external affairs for the Department of Finance, said the aerial move was not in response to any actions by the City Council.

“We are always looking at new technologies that can improve our data collection,” she wrote in an email to THE CITY. “The real estate industry, as well as other jurisdictions, have been using drones for assessment purposes for years.”

The Department of Finance wrote in its solicitation that “inspections conducted by UAS would provide assessors with a more detailed look at properties enabling greater accuracy in valuation.”

The department’s property division is responsible for “assigning fair market values for over one million properties totaling $1.3 trillion, generating an estimated $27 billion in revenues,” according to the announcement.

Eventually, the RFI states, the Department of Finance wants to set up its own drone program, with the ability to train and certify pilots.

Gold wrote that inspections performed with drones will be conducted alongside property department personnel.

“It will still be necessary for DOF Assessors to value any proven drone capture, similarly to how they currently do with our aerial and frontal photography captures,” Gold wrote.

When asked how the department viewed the city’s lack of regulations for drone usage, Gold replied that “we do have some concerns,” but offered no further clarification.

Department of Finance property-tax photos from the 1940s and 1980s, documenting every lot in the city, are preserved in the city’s Municipal Archives. Civic coders have deployed them in time-traveling tours of the city past.

The 1948 law — Administrative Code 10-126, known informally as the navigation statute — prohibits the take off or landing of any aircraft from an area not designated by the city Department of Transportation or Port Authority. The city’s 311 site urges those who spot a drone to call 911.

Brendan Schulman, a lawyer for drone industry giant DJI, says that while nobody has ever been convicted under the statute, the lack of clear drone regulation in New York City causes confusion.

While most of the city falls under the FAA’s tight Class B airspace restrictions because of the proximity to multiple large airports, the local law still technically prohibits drone usage, even if it is outside of the controlled federal airspaces.

“There’s no other city in America that I’m aware of that has relied on the decades-old law to say that drones are illegal,” said Schulman.

He noted that the NYPD already deploys drones, though its quarterly reports show limited use.

“What we need is a general framework for the reasonable, safe use of drones in New York City,” Schulman said.

The Queens Democrat has been at the forefront of many drone initiatives, including the recently passed bill calling for a study of their use in facade inspections. He argues using drones would not only cut down on scaffolding use, but costs as well.

“For my district, I have many, many co-ops spending millions on inspections of the outside of the premises that can be done with a drone,” he told THE CITY.

Now Vallone is calling for a new task force to look at other uses for drones — commercial, municipal or otherwise.

The goal of the task force is to “look at all the different ways drones can be implemented within the city, or because they’re coming one way or another,” Vallone told THE CITY.

Adam Lisberg, communications director for DJI, called the Department of Finance proposal exciting and said the potential of municipal drone usage could be endless.

“If you have a neon sign in Times Square, and you need to inspect the pixels,” Lisberg said as an example, “of course you want to be able to use a drone to fly up and do that work.”

City assessors fear that drones will be the latest technology used to cull their ranks.

“We are already bare bones,” said a veteran assessor who asked to remain anonymous for fear of retaliation on the job.

The DOF currently has about 15-20 assessor vacancies, forcing those on staff to work overtime to prepare the proposed tax roll due Jan. 5, records show.

The department already has a $13 million contract with CycloMedia, which takes pictures of city properties and uploads them into the Department of Finance’s internal database.

Due to the pandemic, in September city assessors began virtual tours with property owners showing them around on a cell phone or computer video feed. Those checks are helpful but can also miss spots if the owner, for instance, claims a light is put in a certain area.

“The future seems to be technology but you still need people to go out there and look at the properties,” the assessor added.

The head of the city’s largest municipal civilian union, which also represents tax assessors, called the move a “gimmick” and predicted it would fail.

“We’ve seen this kind of gimmick before,” said Henry Garrido, executive director of District Council 37. He noted the Bloomberg administration looked into buying helicopters with infrared cameras and said the better solution is more flesh-and-blood assessors.

“You need an actual human eye to look at each property to assess the income coming in,” he added. “No drone will be able to do that.”

Published by The City