Almost 2 million U.S. renters that currently can’t comfortably afford to buy an entry-level home in their current metro area could potentially afford the nation’s typical starter home if they took advantage of increased telework options and moved to a less-expensive locale.

Zillow analyzed renter households for whom monthly payments on a starter home in their metro are unaffordable, but would be affordable on the typical U.S. starter home. Those households were then assigned a probability of being able to telecommute based on income, the worker’s industry and occupation. Millennials, between 26 and 40 years old, represent almost half of the 1.92 million renter households who could afford homeownership if given the flexibility to work from home, the largest generational group to potentially benefit from these new options.

Nationwide, the typical starter home is currently valued at $131,740. But similar starter homes in 37 of the nation’s 50 largest metro areas — home to the lion’s share of the country’s jobs — are more expensive than in the country at large, often by a wide margin. As a result, owning even a modest home (and taking advantage of the wealth-building opportunities that can bring) is out of reach for many households as long as they need to be within commuting distance of a physical workplace.

Rethinking the Relationship Between Work & Home

Close to half (43.6%) of U.S. workers are in occupations in which teleworking is at least theoretically feasible, though less than a quarter of these workers actually telework. But the ongoing pandemic has shaken up how workers and their employers alike think about the relationship between work and home. Over the past six months, many companies have found that their workforce can function better remotely than originally thought.  If telework becomes more of a norm, and businesses allow it where possible, this could give millions of Americans more choice over their home and home finances.

Among the country’s largest metros, the San Francisco Bay Area is home to the most renters who could maybe leave and buy a home elsewhere if telework became the norm — perhaps unsurprisingly, given how expensive the area is relative to both the U.S. and most other large metros. In the San Francisco and San Jose metro areas, 22% and 25.2% of local renters, respectively, would be able to leave the area and buy a home in a cheaper local if telework were an option — almost a quarter million renters total. Los Angeles (17.2% of renters could leave and buy a starter home elsewhere), San Diego (15.4%) and Denver (14.6%) round out the top 5 list of large markets in which the largest share of renters could afford a home elsewhere.

But while homes in most of the nation’s largest 50 metros are more expensive than the U.S. at large, home values for starter homes in 13 of these areas are less than the U.S. median — leaving residents in those areas little incentive to leave and buy a starter home elsewhere.

From the City to the Suburbs

Still, despite whatever financial advantages may be in play, many renters may rightly choose not to move for any number of personal reasons — they simply might prefer to rent in a bustling city like New York, rather than own in a sleepier rural area in another state. And while it may make sense on paper to move far from a given area to be able to afford homeownership, practically speaking it can be very difficult to completely uproot and move away from family, friends and valued local cultural institutions (sports teams, schools, museums etc.).

As such, in many cases, it may be far more likely that current residents can’t or won’t flee and cut the cord with their hometown entirely, and instead exchange it for an extension cord — moving from the commute-friendly center city to farther-flung suburbs, but still maintaining ties. But the affordability benefits in moving from the city to the suburbs, rather than from one metro area to an entirely new, cheaper one, are less-pronounced.

A starter home is worth more in a metro’s namesake city than it is in the metro as a whole in only 20 of the nation’s 50 largest metropolitan areas (and in just 11 of the 27 metros where income data was available on occupations at the city level). In cities including Minneapolis, Phoenix and Denver, a starter home is more affordable than in the larger metro area, leaving city residents with no real price incentive to leave for the suburbs. And relatively affordable starter homes (within the context of the metro) are what separate Los Angeles and San Jose from San Francisco, and Portland from Seattle. In San Francisco and Seattle a large share of renters currently living in the city could telework and buy a starter home outside the city (10.4% and 8.4% respectively). In Los Angeles and Portland it’s a much smaller share (0.8% and 1.6% respectively). 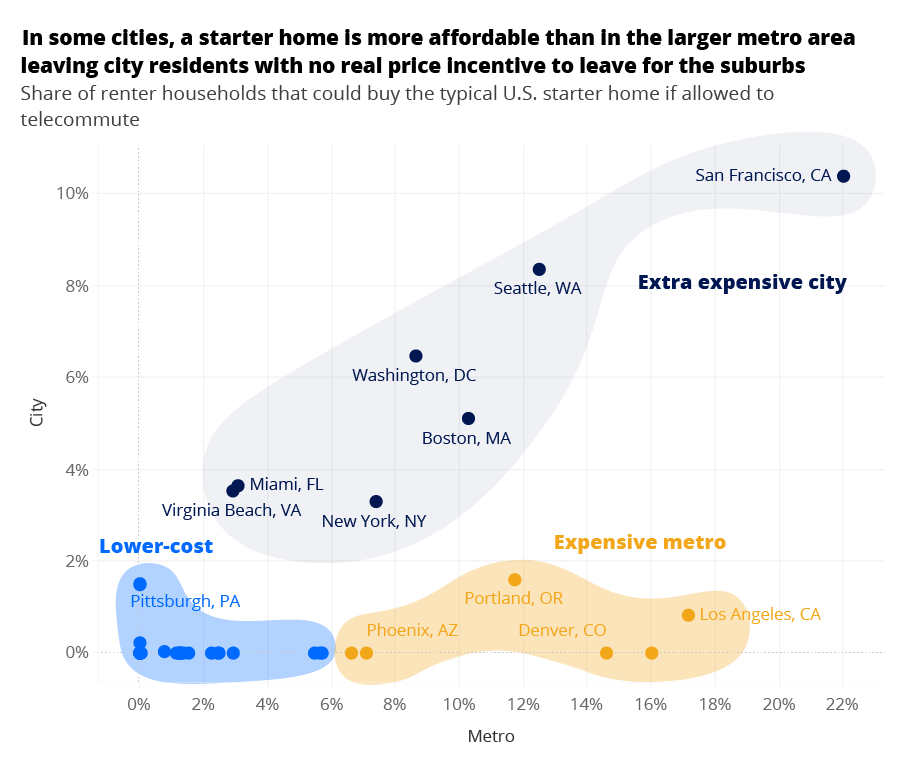 A home is assumed to be not affordable for those households in which expected monthly payments on a starter home (assuming a 30-year, fixed-rate mortgage with a 3.0% interest rate and 20% down, plus estimated taxes, insurance, HOA dues) are greater than 30% of household income. We compared the bottom-tier (referred to here as “starter/entry-level”) Zillow Home Value Index for the United States and for individual large metros. Many cities are not identified in ACS microdata and were excluded from the city-level analysis.

Households were assigned a probability of being able to telecommute by income weighting individual earner probabilities. Individual probabilities were derived from an intersection of the probabilities by worker’s industry and occupation presented in this BLS analysis of American Time Use Survey data. The denominator is the total number of renter households.