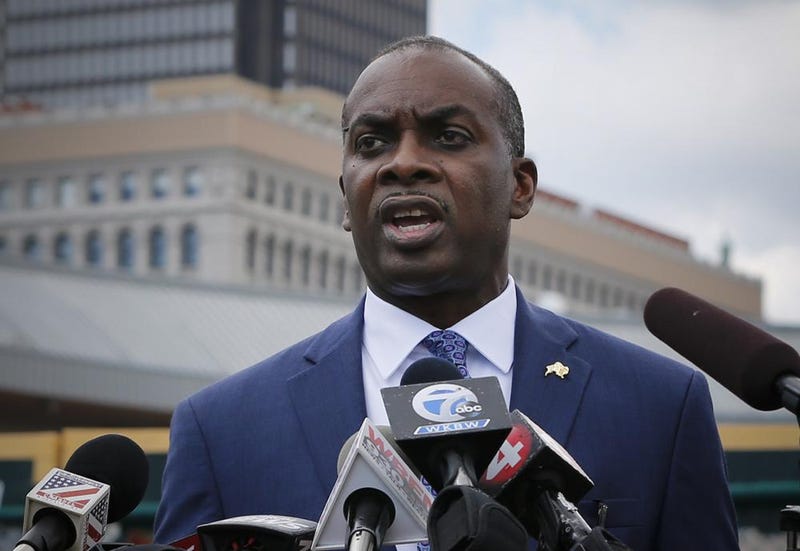 Buffalo, N.Y. (WBEN) – It was announced this on Friday by Buffalo Mayor Byron Brown that there is a 4.53% tax increase that has been proposed as part of the budget for the City of Buffalo.

“My administration has built a fiscally strong city, and we can now reap the benefits of the choices we have made over the last 16 years to attract more business development, outside investment, and new industries,” said Mayor Brown during his speech.” We must turn to our own revenues to keep our momentum going and continue to provide high quality services.

“My proposed budget includes a 4.53% tax increase, which will generate over $6.6 million in annual additional revenue, which will help maintain the investments in people and infrastructure contained in this budget. … Despite this increase, the city’s tax rate will be $10.38 per $1,000 for residential properties, and $18.34 per $1,000 for commercial properties, still less than half the tax rate our city had when I took office in 2006.”

Also as part of Friday’s announcement, Mayor Brown is proposing modest increases to the garbage user fee, as well as permit and license fees. There has not been an increase such as this in four years.

According to Mayor Brown, this will only be the second tax increase the City has seen since he took office in 2006.

While a tax increase for City residents may not be ideal, Mayor Brown says the plan in place is a comprehensive one that will make sure the City is balancing its budget to be able to provide the services it can for its residents.

“The other thing that we are looking at in this budget is raising incomes, getting more people into living wage jobs in this community so that they have the finances that are needed to buy a home, to go to college, to invest in their families. So it’s a comprehensive plan. Taxes are one part of it. The economic development that we’ve listed is another part of it, and our goal is to see the incomes of city residents across the board be increased with some of the programs and policies that were putting in place.”

Part of the reasoning for the Mayor’s decision is to make sure the City of Buffalo’s budget remains balanced without relying solely on the benefit of one shot revenues the City received as a result of the COVID-19 pandemic.

“The American Rescue Plan dollars must be spent in two years, the back casino proceeds are essentially a one shot – the $35 million dollars coming in from that cannot be counted on on an ongoing basis,” Mayor Brown explained. “So looking at our budgetary situation and wanting to stabilize our finances for the long term, we believe that a tax increase was necessary. We think it’s a modest increase, 4.53% on residential and commercial properties.

So what kind of an impact will the 4.53% tax increase for the City of Buffalo have on the real estate market?

“I really feel it’s a very small increase, if you put it into perspective,” said Len Sciolino, associate broker with MJ Peterson Real Estate. “I really don’t believe that it’s ultimately going to affect the real estate market. It’s roughly $150 on a $300,000 assessment, so in the big picture, it’s not detrimental, in my opinion.”

“The nice thing about the City of Buffalo is it already has a really low tax rate,” added Amber Wesser, branch director for Hunt Real Estate for the West Seneca and Orchard Park offices. “The taxes in the city are much lower than surrounding areas. As far as the overall effect on the real estate market, it’s still going to be a fantastic value to purchase in the City.”

Given the current trajectory of the City, a decision to hike up taxes, at this time, not only may come to a surprise for residents, but also to realtors.

“I would have expected something a little bit sooner, because as we’ve seen over the last few years, the City of Buffalo has been growing. There’s been a lot of interest in the city, so for it to come this late in the game, I’m a little surprised,” Wesser said. “But I do think it’s been a tremendous value for people who’ve lived there for so long that it’s kind of not surprising in the same sense.

“We’re seeing so many people that want to be in the City. It’s such a location-driven area that it’s not surprising to me that this would be done there.”

As for Sciolino, he also believes the tax increase comes as a surprise. He sees it as the City of Buffalo maybe should have waited a year to make it an easier pill to swallow for residents.

“I think, ultimately, as a taxpayer, the questions come up as, what more am I going to get for this tax increase? I think that’s the bigger question and the bigger problem, and I think the city owes the taxpayers an answer, as far as that goes,” Sciolino said.

While a tax increase will also see property taxes rise, could this help see the housing market cool off from being a hot market in the area?

“With any luck – I say that for the buyers out there – it may cool it just a little bit, but maybe it’ll make a seller to decide that they want to a change of scenery and uproot their lives a little bit, which is OK too, because we need the inventory,” Wesser said. I don’t think it will have a tremendous impact on the real estate industry in the City of Buffalo, but it could impact it slightly. About the same as, probably, interest rates.”

“You know, the market is still very excited,” Sciolino added. “The city’s in high demand, and I really don’t feel or believe that this small increase is going to ultimately affect the market. I mean, we should keep in mind that the City still is one of the lowest-taxed municipalities in all of Western New York. So relatively speaking, I still think we’re going to be OK.”