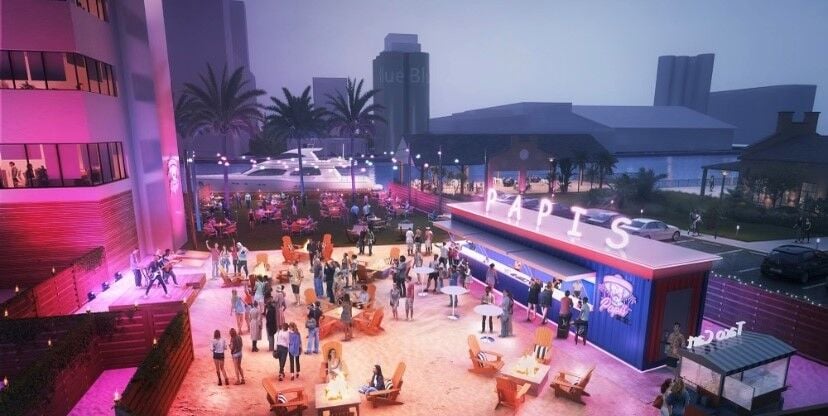 The Buffalo River is already becoming a hopping place to be. And it’s about to get even more active, with a new eatery and lots more apartments.

A Tex-Mex restaurant in Amherst has announced plans to open a new waterfront and beach bar on a sandy pit area adjacent to an Ohio Street apartment building.

Papi Grande’s will set up shop on the north side of Ellicott Development Co.’s five-story project at 301 Ohio, using a pair of shipping containers to host a pop-up summertime bar and restaurant for up to 1,000 patrons, on what is now a fenced-in area between the building and Tewksbury Lodge at River Fest Park.

The popular suburban eatery – at 4276 Maple Road – announced on social media that it will offer its popular drinks and tacos, as well as live music DJs, cornhole, other yard games and events each week.

“We are so excited for the opportunity to add to the beautiful waterfront of downtown Buffalo!” the restaurant said in a post on its Facebook page. “Come for the signature margaritas and liquid gold Queso. Stay for the party.”

Ellicott CEO William Paladino said he had long planned to put some kind of “beachy bar” on the site, but put that idea on hold until Papi Grande owner James Spano reached out to him about the idea last year. The restaurant’s owner hoped to open by last summer, Paladino said, but couldn’t get the state liquor license in time.

“He’ll have some cool music, and you can sit around the water,” he said.

The restaurant will wrap around the back of the building to the patio area along the water, in front of space now occupied by marketing agency Clevermethod.

That 8,384-square-foot loft space – directly across the water from RiverWorks – is being marketed to new commercial office tenants by Hanna Commercial Real Estate brokers Paula Blanchard and Joseph Deck. It features 22 private glass-walled offices and three conference rooms, with contemporary finishes, unobstructed views, roll-up doors, and access to a patio, a dock and a kayak launch.

And it’s garnering attention from prospective new occupants, following an open house last week that drew “considerable interest, even though the office market is kind of soft right now because of the pandemic,” Blanchard said. A technology firm, a financial services and professional office company, and a healthcare business are all “looking at it seriously,” she said.

Clevermethod has been operating fully remotely during the pandemic, and will continue to do so for now, but plans to downsize to smaller office space elsewhere, Blanchard said.

Papi Grande joins Shuck Shack, a fresh seafood and oyster bar that Fresh Catch Poke owner Mike Tobin has operated on the south side of 301 Ohio for the past two summers. Like Papi Grande, Shuck Shack used a couple of containers that it converted into a storefront. 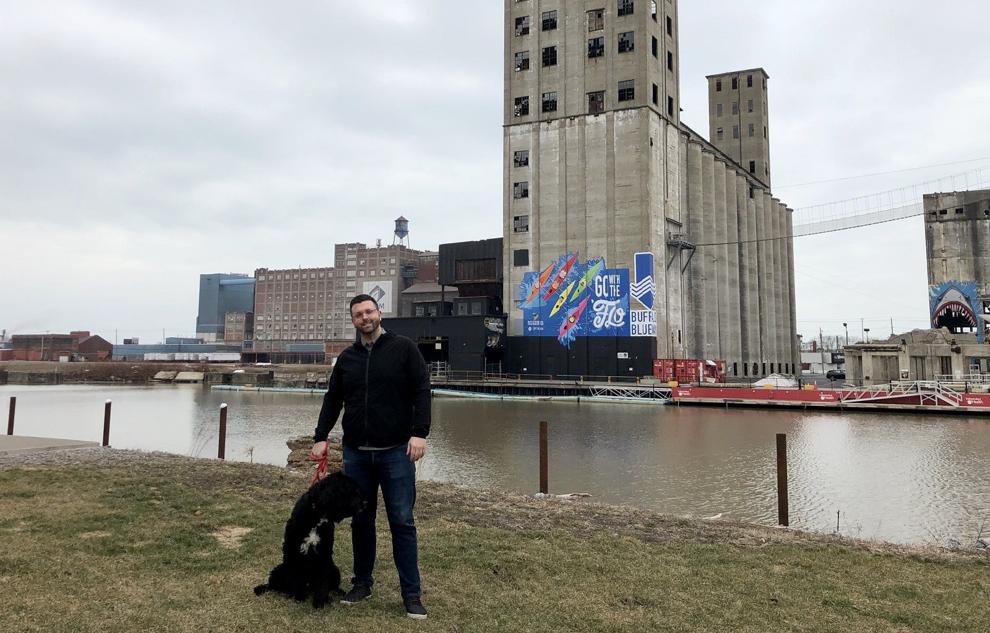 However, Shuck Shack will not operate this summer, because Ellicott hopes to get underway with a major $75 million to $100 million expansion project to the south, which could bring upwards of 100 to 125 new apartments and more commercial or retail space to the Ohio Street corridor.

Plans call for at least three more apartment buildings with first-floor retail or commercial space, Paladino said, as well as a “parking structure of some sort,” on Ohio and adjacent Chicago Street. Each new building would be six or seven stories in height, with apartments on the upper levels. Both Shuck Shack and Papi Grande’s will eventually go into one of the new buildings as tenants.

The project still has to come before city officials for approval, followed by brownfield cleanup work late this year or early next year, and then 24 to 36 months of construction. But if the first two buildings go well, as Paladino expects, the developer would put up a third building “and still have room for a few more.”

“We want to continue to create a new neighborhood down there,” Paladino said. “We can do it smartly, and just be careful not to take on too much at once.”

That would build off the success of not only 301 Ohio – with 21 apartments – but also Ellicott’s mixed-use Cooperage project at 55 Chicago, which boasts a mixture of apartments, Resurgence Brewing Co., Hartman’s Distillery, and the Central Rock Gym.

Additionally, there’s Samuel Savarino’s 78-unit Buffalo River Landing apartment building at 441 Ohio, and the conversion by Frizlen Group and BRD Construction of the former Barcalo recliner factory into Barcalo Buffalo Living & Commerce at 225 Louisiana St. The city also invested heavily in a new streetscape along Ohio, and is now working on a boardwalk. “That’s really important to the continued vitality and growth of that area,” Paladino said.

There’s also the other side of the river, where Ellicott also owns property on Ganson Street. That’s just down the road from RiverWorks, which draws patrons for its restaurant, bar and sports activities. And Generation Development Group is redeveloping two of the Silo City complexes – where Ganson and Ohio meet – into several hundred new apartments and artist space.

“People have said for years we have one of the most underutilized waterfronts of anywhere,” Paladino said. “It’s become a pretty neat place. The more we can get down there for people to do, kids and adults, it’ll take off.”