Once Meccas of Retail Therapy, Now Homes to Elder Americans 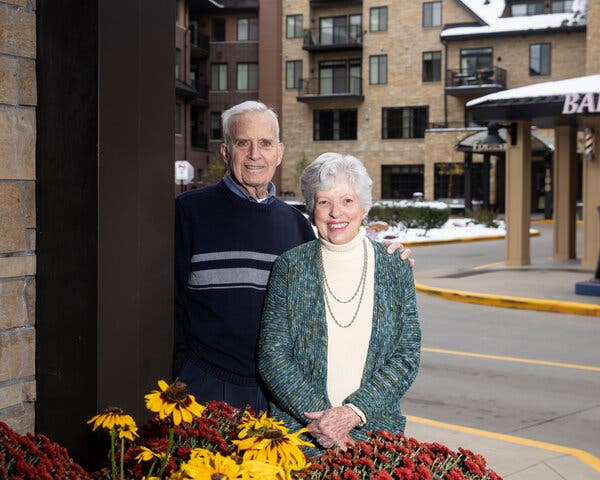 George and Pat Ritzinger moved five years ago to a community that few would initially consider a retirement mecca: a former shopping center site in Wayzata, Minn. They had spent the previous 15 years in a townhouse development in the Minneapolis-St. Paul area, yet found the atmosphere chilly.

“The neighbors were unfriendly,” Mr. Ritzinger, 85, said. “It was a struggle to organize social gatherings. Watching garage doors open was the main excitement.”

In their current community, Folkestone, they can walk to shopping and other amenities and engage in numerous activities. A bonus: They are close to family.

There is little denying that a vast amount of retail space is emptying during the coronavirus pandemic — 25,000 stores may close by the end of this year — all while the over-65 population is increasing by about 10,000 a day. So even though arena-like malls and strip shopping centers might never see another Sears, J.C. Penney or Lord & Taylor store, some are being transformed into something more interesting: comprehensive upscale retirement complexes.

Born and raised in the Philadelphia suburbs, the Ritzingers moved to the Twin Cities in 1974 for his job as a sales executive for DuPont. After living unhappily in a 16-unit townhouse complex in nearby Eden Prairie, they decided to move; Mr. Ritzinger created a spreadsheet to keep track of places that had the features they desired.

Besides being close to shopping, dining and recreation, the couple can hop on a Folkestone bus that takes them around town. And Mr. Ritzinger can keep up with his woodworking hobby in the community’s wood shop.

To accommodate residents during the unforgiving Minnesota winters, skyways connect the three senior buildings in the expanding development. “Wayzata is a delightful place,” Ms. Ritzinger, 84, said. “We can look out on a lake, and our sons and grandsons are nearby.”

The senior-living section of Folkestone is run by Presbyterian Homes & Services, which owns 49 properties in Minnesota, Iowa and Wisconsin. The home uses the continuing-care communities model, in which residents can move to assisted living or skilled nursing care as their needs change. Folkestone is part of the Promenade development, which includes shopping, beauty and wellness services.

Like hundreds of retail redevelopments underway around the country, the Ritzingers’ apartment sits on land that was home to a shopping mall built in 1967. It was demolished in 2012, and Folkestone opened in 2013.

The factors driving retail-to-housing transformation were set in motion years ago but have been accelerated by the pandemic. The demise of malls and shopping centers has also been amplified by the shift to online retailing in recent years.

The crisis in mainstream retailing has become an outsize challenge and opportunity for municipalities, real estate owners, managers and developers. More than 8,000 stores have closed so far in 2020, according to Coresight Research, after 9,500 shut down last year. Mall stalwarts like Bed Bath & Beyond, GNC, Pier One Imports, Men’s Wearhouse, and New York and Company are in various states of bankruptcy and reorganization. Department stores such as Neiman Marcus and Lord & Taylor are on a long list of retailers going through shutdowns.

Ellen Dunham-Jones, a professor at the Georgia Institute of Technology, has researched the repurposing trend. Retail closings across the country have led to 400 proposals for retrofits, with some 315 projects completed or in progress. Notable examples include the Ridge House Apartments in Wheat Ridge, Colo.; the PathStone Skyview Park Apartments in Irondequoit, N.Y. (occupying an old Sears site); and Aljoya Thornton Place, on the former parking lot of the Northgate Mall in Seattle, which was one of the nation’s first regional shopping malls.

Professor Dunham-Jones writes about Folkestone in “Case Studies in Retrofitting Suburbia,” her upcoming book with Prof. June Williamson of City University of New York. She noted that the complex, in addition to occupying a former retail site, took a more progressive turn in its design.

“Baby boomers don’t want to be isolated,” she added. “They want to be connected to the community.”

While it takes years to plan, finance and approve retail redevelopments, “communities are cognizant of the need for rebuilding initiatives for their vulnerable populations,” said Emily Roberts, an assistant professor in the College of Education and Human Sciences at Oklahoma State University.

She is working with a student design team on a plan for Crossroads Mall in Oklahoma City, a site that its owners have been struggling to redevelop. A rebranding in 2017 failed, and now the community is working to turn the 800,000-square-foot site into a facility modeled after a Dutch community that is customized for people with dementia.

“Our goal is to create a mixed-use city center model in which residents can remain engaged and active throughout their day,” Professor Roberts said. “Malls give us the space we need to rethink dementia care, repurposing the cavernous interiors while creating outdoor spaces which are connected to the adjacent housing.”

What can you expect when considering a shopping center redevelopment? Continuing-care communities can be pricey. As a rule, you will pay more for independent living developments than for conventional retirement or assisted-living communities, and even more for stepped-up levels of care from assisted living to memory care. In addition to monthly charges, you can pay an upfront fee from $100,000 to $1 million to get into continuing-care communities — a common economic model used to cover the total cost of care.

In the Promenade-Folkestone complex, the Ritzingers rent month to month and had a choice of 40 floor plans. They pay $4,360 a month for a two-bedroom apartment with a sunroom overlooking Lake Minnetonka, and paid an entrance deposit of $217,000, which reduces their rent and is refundable when they vacate that apartment.

Monthly rents at Folkestone range from $2,210 for a one-bedroom apartment to $6,810 for a two-bedroom with a library and a sunroom. Required deposits range from $95,000 to $328,000. (The cost escalates with the larger units and level of care.) The fees cover all utilities, maintenance and taxes.

Of course, there are countless variations for senior living. You could even live in luxurious independent-living villas within senior communities, or in mega-complexes like the Villages, north of Orlando, Fla., although most in-home care services are a la carte.

Services and facilities are much more expensive in large urban areas, which prompts a broader question: Will this new wave of retail-to-residence transformation produce enough affordable senior housing for the future?

More than half of middle-income American seniors — some eight million — are not going to be able to afford basic assisted-living residences, according to a survey by NORC at the University of Chicago. Although people may relish being able to walk to amenities and shopping, the important question is: Will they be able to afford the upscale lifestyle of a repurposed setting? Changes afoot in the new redevelopments may address that issue, although only partly.

Strategic locations will make a difference, Professor Dunham-Jones is finding.

“By locating senior housing in walking distance of shops, libraries, gyms and recreation centers, the housing no longer needs to provide those amenities internally and may reduce costs accordingly,” she said.

For the Victory Centre, on the site of the former Park Forest Plaza shopping center in Illinois, “the municipality owned the land and played an important role in insuring affordability,” she said.

The only thing that’s undeniable is the demographic wave that shows the expanding need for senior housing: The 75-and-over population alone will grow by five million in the next five years, according to Marcus and Millichap, a commercial real estate firm.