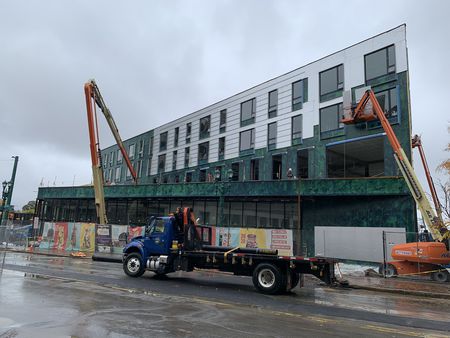 Syracuse, N.Y. — The Salt City Market food hall set to open in downtown Syracuse in January is seeking a property tax deal with the city after assessor David Clifford determined it does not qualify as a charitable business.

The Syracuse Urban Partnership, a nonprofit organization created by the Allyn Family Foundation to develop the food hall, has applied to the city for a payment-in-lieu-of-tax deal.

Under the proposed deal with the city’s Industrial Development Agency, the organization would pay $1.5 million in lieu of taxes over 15 years. That’s $963,000 less than it would pay in property taxes over the same period if the project was fully taxed.

The organization is building the 78,000-square-foot mixed-use development on the site of a former parking lot at 484 S. Salina St.

It will feature 24,000 square feet of public market and grocery store space on the 1st floor, office space on the second floor, and 26 mixed-income apartments on the upper two floors.

The public market on the first floor will feature 10 stalls for “burgeoning” food entrepreneurs as well as a 2,500-square-foot grocery store that will provide access to healthy foods “in a high-density, walkable, transit-connected area that currently does not have readily available produce,” according to the organization.

“The food incubator is partnering with UpStart, a regional entrepreneurship training program, to provide comprehensive business training as well as ongoing technical assistance to create the best chance of success for the business owner,” the organization said in its application to the development agency. “The program focuses on communities of color and immigrant communities, a valuable and largely untapped resource in Syracuse, NY.”

“They’re going to be renting out retail space, office space and apartments,” he said. “It just doesn’t fit into one of the easy to describe uses that are acceptable under the real property tax law.”

He said he suggested the organization seek assistance from the industrial development agency, which offers exemptions for, among other things, mixed use and residential projects in areas that require revitalization or that consent to rent at least 20% of its residential units to low-income residents.

“It’s a good project and it’s something that should be supported,” he said.

The organization said it will be offering deeply discounted rents to food vendors. As a result, the project will require $250,000 in annual operating subsidies from the Allyn Family Foundation, in addition to $2 million a year from the foundation for the project’s mortgage payments, it said.

“This is not stated to disparage the project, but rather to show just how committed the project is to providing a cultural amenity in the City of Syracuse that offers a path for entrepreneurs of color to build generational wealth for themselves and their families,” it said.

Maarten Jacobs, executive director of the Syracuse Urban Partnership and director of community prosperity at the Allyn Foundation, told The Post-Standard | syracuse.com the property tax exemptions being sought from the development agency will help the project “lose as little money as possible.”

“The model is such that we are in no way going to make money,” he said.

Under the tax deal the project is seeking, the building would be exempted from property taxes for 10 years, with the exemption phased out over the following four years. The exemption would not apply to the $1.8 million assessment on the land under the building. The project would be fully taxable after 15 years.

The industrial development agency does not normally assist nonprofit organizations, in part because they are often already tax exempt. However, Judith DeLaney, the agency’s executive director, said the agency’s counsel determined that the Syracuse Urban Partnership would be eligible for assistance from the agency.

The agency could vote on the application after a public hearing at its November meeting.