Sandra Lee has struck a deal to sell the New Castle home called Lily Pond that she shares with her ex-boyfriend, Gov. Andrew Cuomo, for $1.85 million.

Real estate broker Greg Schriefer, of Sotheby’s International in Manhattan, confirmed Monday that the governor’s residence for the past 11 years is in contract, with a closing date still to be set.

“We’re not quite sure on the closing date,” said Schriefer. “We are waiting on a few things to come through. We’re sorting out when Sandra will be able to come back for the closing and remove some of her personal effects.”

The potential sale reveals inequities in New York state’s broken property tax system, which Cuomo has shown little appetite to fix. The sale would be 39% more than its taxable value.

Announcement of the deal caps a 17-month rollercoaster ride on the Westchester luxury housing market for the author and television chef, who has launched a new cooking show at Today.com. It began in May 2019 with Lee announcing on Page Six of the New York Post that she would sell the 4-bedroom home on 3 acres for $2.3 million, only to lower the price to $2 million when it went up for sale.

The slumbering 2019 market sent the asking price down twice, cratering at $1.6 million in March 2020 when the real estate market came to a halt as the COVID-19 pandemic erupted.

She took it off the market later in the spring, but put it back up for sale in August for $2.2 million as high-earning New York City residents rediscovered the suburbs in COVID-19 times.

The Post reported the sale on Page SIx on Sunday.

The Post headline, however, deserved a tweak. The Post story said the Lee and Cuomo once shared 4 Bittersweet Lane. They continue to share it, though Lee has moved to California, where the Post noted she had recently purchased a waterfront home in Malibu.

Cuomo, however, has maintained his official residence in her home, 13 months after the couple announced their amicable split.

Cuomo remains enrolled as a New Castle voter. State Police have continued to guard 4 Bittersweet Lane, which Cuomo has said he stays at occasionally while working downstate.

Cuomo senior advisor Rich Azzopardi did not respond to questions regarding where Cuomo intends to move,or what might be done to bring tax equity to municipalities like New Castle that have not revalued their real estate in decades.

How Lee benefits from lax state law
The sales price at 4 Bittersweet Lane opens a window on New York’s unfair property-assessment system, which does not require municipalities to periodically update their assessment rolls, as occurs in 31 other states, including the neighboring states of Connecticut and Massachusetts. 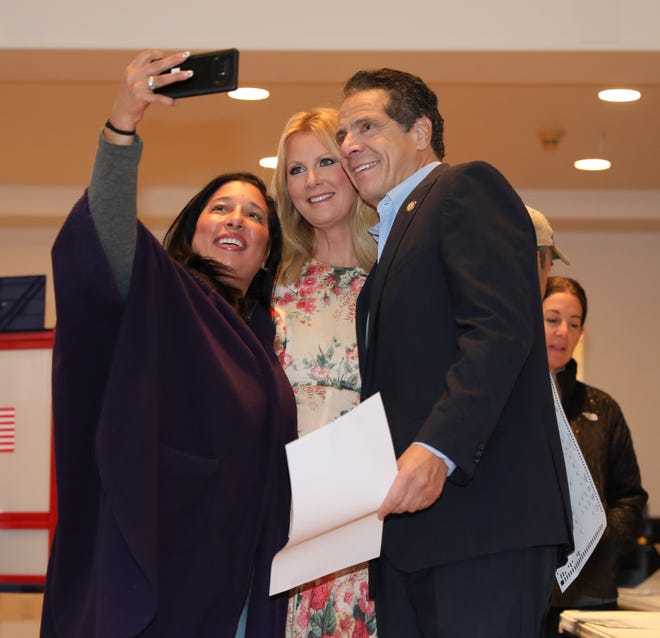 New York Governor Andrew Cuomo and girlfriend Sandra Lee take a selfie with a voter as they prepare to vote at the Presbyterian Church of Mount Kisco, Nov. 6, 2018.
It’s a boon to high-end homeowners like Lee, as what you pay in property taxes has an impact on how much someone will spend for a home.

Municipalities in Westchester and Suffolk counties have the worst record for updated assessment rolls, according to state data.

Under state law, assessors can only increase as assessment to reflect a recent if they conduct a town-wide revaluation. But New Castle has not done so for 42 years.

Instead, the municipality uses what’s called the “equalization rate,” an imperfect formula that calculates a home’s taxable value as a percentage of its outdated assessment. The rate is based on a survey of recent sales in the town.

New Castle homes are assessed at 19% of their purported fair market value.

The equalization rates tends to undervalue high-end homes, according to Tax Watch review of recent revaluations in Scarsdale, Mamaroneck, and Ossining.

A year ago, New Castle Supervisor Ivy Pool said the time wasn’t right to conduct a revaluation because such an undertaking to bring equity to the town would create “unwelcome stress” to homeowners already struggling with a volatile housing market and the federal cap on deductions for property tax payments.

I posed the question to all five New Castle town board members on Monday in email messages. None responded. Deputy Supervisor Jeremy Saland declined comment when reached by phone.

Officials in Westchester towns that have not conducted assessments in decades say it’s a strategy to artificially depress the taxable value of property in the municipality, so their share of county taxes would be lower. That means property owners in municipalities that have up-to-date assessments end up subsidizing municipalities like New Castle, which have not.

And that makes the lucky buyer of 4 Bittersweet Lane even luckier.