As wireless technology changes how and where people do their jobs, giving many the freedom to work remotely at least part of the time, so too is it changing their thinking about real estate.

Remote workers still represent a minority of the work force. According to the Bureau of Labor Statistics, as of last year about 24 percent of employed persons worked at least part of the time at home; among those with advanced degrees, it was 42 percent. In a survey last year of 23,000 new home shoppers, John Burns Real Estate Consulting, a firm with offices across the country, found that roughly 30 percent worked at home between one and four days a week; 13 percent worked at home full time.

Nevertheless, as the numbers have grown, some in the real estate industry are wondering about the long-term impact, said Zach Aarons, a co-founder of MetaProp, a New York City venture capital firm focused on real estate technology. Some investors in New York real estate see a potential threat if remote workers start to exit the city for less expensive locations, he said. The looming question is: “Do people live in the city because they like the community, or just because it’s convenient to their job?” 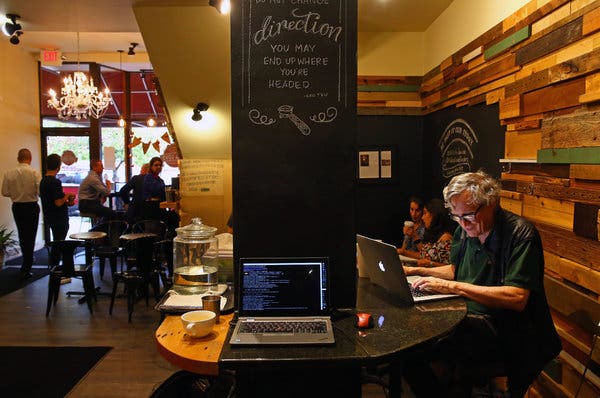 Brad Hargreaves, the founder and chief executive of Common, which operates co-living communities in urban markets, said that while he believed the trend away from daily in-office work would continue, he didn’t believe it would result in an exodus out of major cities.

“I still think there’s a lot of benefit for people living in an urban center, both personally and professionally,” he said. “What will be needed is more flexibility for residential spaces.”

The rise in remote work is already changing people’s preferences in single-family home and apartment design, and affording them greater freedom in choosing where and how to live. Here are seven ways in which the trend is changing the housing market.

“The importance of home offices has almost begun to rival the attention that buyers give to kitchens,” said Robin Kencel, an associate broker with Compass in Greenwich, Conn. “Where they will work is on nearly every buyer’s mind.”

While some buyers just want a comfortable space to plop down with their laptops, others want a dedicated room where they can shut the door and take calls without interruption. “Back in the day you’d have the mahogany-paneled library, but we’re not living in a formal world now,” Ms. Kencel said. “Now, people are looking for more of a textured, comfortable feeling — natural light, doors to a private terrace, and great wall and floor finishes.”

Alison Bernstein, the president of the Suburban Jungle real estate agency, based in New York City, also finds that buyers are “highly focused on, how do we functionally work at home?” And that focus extends to work space for their children. “Dedicated homework areas are very, very popular,” Ms. Bernstein said.

Media Rooms Are So Yesterday

Now that people can stream whatever they want to watch on their smartphones, laptops or tablets anywhere in the house, spaces designed solely for that purpose are increasingly viewed as superfluous, Ms. Bernstein said.

New home sizes are trending downward, and buyers are looking for spaces that can serve more than one purpose, said Robert Dietz, the chief economist for the National Association of Home Builders. Dedicating space for a media room has “fallen out of favor,” he said.

On having a home office Ms. Weil moved to New Jersey from Midtown East in New York City in 2016 with her husband and two young children.

“I’ve always worked at home at least one day a week since I had my son, who just turned 6. When we lived in the city it was atrocious — I worked in my bedroom, from coffee shops. Here, we converted one of the third-floor bedrooms into a real office. What’s nice is there is a door to the stairs to the third floor, plus the door to my office, so I can close both and hear nothing from downstairs. I get more done now, but I still have a really easy commute into the city when I need to get to meetings there.”

The shift also ties in with the rise in remote work: People who spend a lot of time working at home frequently don’t want to spend most of their leisure hours there as well, especially in the city, said Martin Eiden, an associate broker with Compass in New York.

“They are usually dying to go out and meet people,” he said. “The home entertainment factor has gone down.”

A Shift in Apartment Design

Lounge spaces set up as shared work areas for residents are common now in newer residential towers in New York. But developers are also tweaking apartment layouts to make it easier for residents to set up a home office. 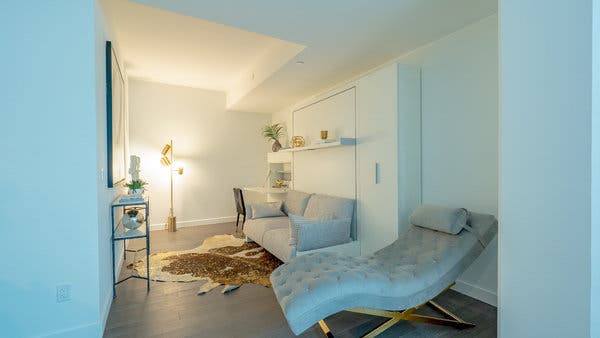 At Avora, a new 184-unit condominium on the Hudson River in Weehawken, N.J., buyers can choose from floor plans that include an “alcove bonus space.” The spaces, which measure 11 feet square, “provide a dedicated space for work at home, but they’ve also been used as an art studio for a child or a place to display an art collection,” said Jill Preschel, the vice president of sales and marketing for the New York Metro Division of Landsea Homes, the California-based developer.

At Rose Hill, a new 45-story luxury condominium tower in the NoMad neighborhood of Manhattan, about half of the 123 units come with small “flex rooms” that can be closed off with sliding glass doors. The designs provide buyers with the extra work space they may need without requiring them to pay for an additional bedroom, said Meg Brod, a senior vice president and a regional development officer for the Rockefeller Group.

“You’re only paying for what you need, but it’s extra room you can really appreciate,” she said.

The Rise of Co-living

Co-living developments now account for more than 3,000 beds in cities across the country, with at least another 9,000 in the pipeline, according to a recent report from Cushman & Wakefield. The communities offer tenants private bedrooms in suites with shared living areas. Generally more affordable than standard rentals, and with more flexible lease terms, the developments also offer shared common areas for socializing and working.

“The trend toward co-living is very closely correlated with the rise in remote work — it’s that desire for flexibility, and to be able to move from job to job, city to city, without there being huge ramifications in getting out of leases,” said Susan Tjarksen, a managing director at Cushman.